There’s been some question and debate around the interwebs about whether or not the new MacBook Pro with Retina display has an optical out or not. Pretty much every Mac released for the past ten years or so has provided digital audio output via the 3.5 mm stereo jack, requiring a mini-TOSLINK cable or adapter to utilize. However, the Apple does not list such functionality on the rMBP tech specs, leading to some speculation about whether Apple has decided to EOL this feature.

Here’s some pretty definitive proof that the feature is in fact still available and ready to go, courtesy of a Monoprice mini-TOSLINK adapter. Ooh, shiny red glow. Do not look directly into laser with remaining eye. 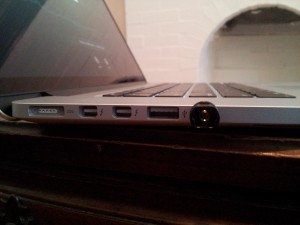